There are many, many opinions on what is the “right” way to use technology when writing creatively. Some are deeply held, others are more flexible. There may be a divide when it comes to the age groups that different writers fall in, but even there, you’ll find exceptions (some vocal about it). I’m a technologist, so naturally my views are skewed by my experience, but I’m also in that gray area between “baby boomer” and “Gen X”, depending on where the line gets drawn. Frankly, I’ve never really identified with either all that strongly. But I won’t pretend that my age and experience don’t influence my preferences when it comes to the tools I use for writing.

I’ve noticed that there are a cohort of writers out there that swear by the more historically traditional tools of the trade: either pen and paper, or the venerable typewriter. Personally, I love typewriters, although at the moment I am without one. I have some vintage machines I’m hoping to acquire in the coming years. They are both marvels of art and engineering. And there are those that swear by them as their main writing tool. For them, there is some visceral connection between the words and the act of forging them on paper.

I get that, but I also know that I was about three times faster on an electric typewriter, and I’m faster again on a computer keyboard. I’ve been writing other work that way for so long that it’s my “connection”, but that’s me. It doesn’t mean I won’t try using a typewriter (once I get one) as an experiment. I suspect I won’t find it as productive, but I haven’t used one for writing in decades, so I could very well be wrong. If nothing else, it will be fun to give it a go.

Over time, I’ve experimented with a few different technological approaches to writing. I tried using a Freewrite Traveler, but found it a bit awkward and cumbersome both physically and from a workflow point of view. The bigger reason, though was I  didn’t see the point of dragging another piece of technology around, since I already have a laptop (with an arguably better keyboard). I also experimented with a dedicated writing tool on iPad (Hanx Writer from Tom Hanks) coupled with a bluetooth keyboard that approximated the feel of a typewriter. It was fun, but it felt like it was slowing me down, that it wasn’t “keeping up” with my thoughts as I tried to get them down. I won’t pretend that I was looking at that objectively, that is a purely subjective feeling on my part.

Most of my writing over the past four decades has been done in either a simple text editor (before PC’s and word processors were a thing) or using a word processor, virtually all of it using Microsoft Word. I’ve used others (Framemaker, Pages, Google Docs, LibreOffice, a host of others on Unix, Mac, and Windows), but Word became the standard in most industries, so that’s what we used. For my creative writing, I began using Word, but in the past few years I’ve been using Scrivener. It suits the workflow that I’m comfortable with, and it provides me with some reasonably straightforward ways to organize and edit my work. It also allows me to collect notes, character outlines, external links for references, all in a single project.

My Workflow (for now)

During the past year, I’ve begun to develop my own personal workflow that seems to help me focus on my writing. I expect it will continue to evolve. My participation in NaNoWriMo 2022 helped focus and structure it more than I had in the past. Part of how I work was inspired by an article I read in Writer’s Digest, on some approaches to “winning” NaNoWriMo. It starts with the checklist I made, which are the “work items” I need to put in place to get writing. 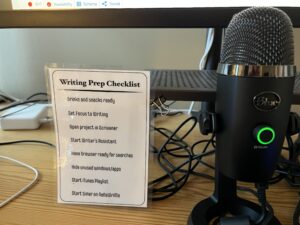 This is in front of me on my desk, ready for me to refer to it to make sure I haven’t missed something in my rush to get writing. I use the Focus feature on my Apple devices to filter out distractions like the arrival of new email or text messages, or any news alerts. I have a tool (I’ll describe later) that helps me with some of the mechanical elements of crafting my story. I keep a web browser ready for any searches I might have to do, but other than that browser window, Scrivener, and my new tool, all my other apps and windows are hidden away. I remove all the other distractions so I can focus on the task at hand, writing.

Part of my writing environment is the music playlist that I’m using. I’ve created one specific to the story I’m working on. It’s a collection of songs (currently the soundtracks for both Blade Runner movies, Andor, The Martian, and The Expanse) meant to set the mood of the story. I’m hoping my current novel captures the kind of dystopian world seen in Blade Runner, The Expanse, and parts of Andor. A new novel will require a new playlist, since it will likely have a different vibe, a different feel.

A key for me when writing prose is that the music not include lyrics. I have no problem with them when I’m writing code, but when I’m writing words, I find the lyrics can be a distraction. Some of the songs in my current playlist do include vocals, and I think I’m learning to tune out the words and just listen to the music. I haven’t removed them from this playlist, but I’m leaning towards them being deleted from the playlist. They can be a bit jarring when they appear.

This Is Me, Maybe Not You

The approach I have taken will not work for everyone. Some of what I do might be useful for others. Other parts will seem ‘wrong’ to people. I will not claim that I’ve captured the “secret sauce” for being a productive and creative writer. Partly because I’m still new to this. Partly because I’m not representative of all writers. No one is. What works for some will not work for others. But sometimes we can learn from others, and take what works from them, and leave what doesn’t. My goal is to remain open-minded enough to try new things, to help me to not just be ‘productive’, but to enjoy the act of writing at the same time. This isn’t meant to be ‘work’, even if I’m hoping to make something of a career of it. Most of my main career wasn’t ‘work’ either.

So this is an evolving thing, and I expect to add, drop, and modify elements of it. Some will be about revisiting the technological components. Some will be about the processes, the procedures, the rituals, finding what works (for now) and doesn’t work (for now). I don’t want to become beholden to something for any particular reason, either.